I was recently asked to design a point-2-point wireless solution which fast became a point-to-multipoint.  Regardless of the design the Access Points used were AIR-AP1532E-UXK9 with a vision of utilising the 5Ghz back-haul and a 14dBi directional antenna to cover line-of-sight.

These UX Access Points address the worldwide regulatory compliance by dynamically setting their regulatory domain/country based on their GPS location – sounds simple right and it is important to point out that you can’t use the 5Ghz until the AP has been provisioned, as the 5Ghz stays in Scanner mode.

However, the provisioning of these Access Points is carried out by either the Smartphone method or via WLC.  I needed to use my iPhone but the Apple iPhone app was broken (confirmed by Cisco: Bug ID CSCuw28658), nor did the Android App work, but thank you Windows Smart phone :), you saved the day (never thought I would say that).

Followed the User Guide to set the domain. remembering to use the WPA v2 and the default userid/password for AP provisioning and not the SSID Password 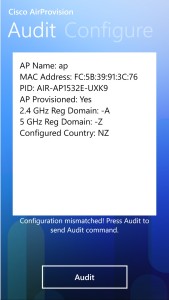 Got there in the end but Dear Cisco, I’m unimpressed with the process for provisioning these AP’s, it definitely needs improvement.