OK, this wasn’t quite as simple as i would have first thought but I got there in the end.

The version of Prime I was initially running was 2.0.0.0.39 and had to be upgraded before I could do a backup that would be compatible with 2.2. 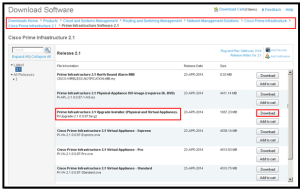 Once downloaded I dropped the file onto my FTP Server.  This can be viewed from the PI Server by running the show repository ftpserver

This takes a while and at the end you will recieve a message ‘Application upgrade successful’, then you can restart NCS – ncs start

Once complete you can then backup your PI Server (using the Backup/Restore procedure) including configuration but most importantly all your historical data.

Then you can restore the PI-Backup to your new 2.2 instance of Prime 🙂 using the following command: